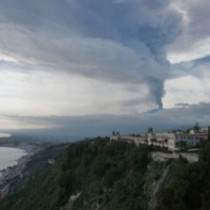 Mount Etna: is it dangerous?

Each time we post some spectacular photos of Mt Etnas last activities, lots of guests and friends contact us with similar questions:

– is it dangerous?
– shall I reconsider to come to Taormina?

Seen from far away it is obviously difficult to estimate the reality, but please be all reassured:

although our fiery Sicilian mountain, UNESCO World Heritage Site, boasts the title of being Europe’s most active volcano, despite being in a state of almost constant fascinating activity, vulcanologists DO NOT consider Mt Etna to be a dangerous vulcano.

Dangerous vulcanos are, siply put, those ones consisting of one single crater beeing obstructed since decades or even cenrturies. You can compare them to a bottle of champagne. If pressure from the inside of our earth raises, they might esplode on the weakest side causing a dangerous eruption.

Mount Etna instead, is not a single vulcano but a VULCANIC SYSTEM consisting of approx. 470 crates that have been active in the last 6.000 years in an area around it’s slopes having a diameter at the basis of approx. 40 km. So whenever the pressure mounts at Mt. Etna, there is always a weaker summital point to allow lava flowing out avoiding strong catastrophic explosions.

Most eruptions on Mount Etna, statistically, have been/are SUMMIT ERUPTIONS, effusive or explosive ones (sometimes also a combination of the two types) and taking place in the area immediately around the 4 main summit crates located at approx. 3.350 mt above the sea level.
Accordingly and interestingly, the elevation of Mt.Etna varies with volcanic activity: it is frequently given as 3,350 m (10,990 ft), but many sources that support this concede that it is approximate because the elevation generally raises slightly after each prolongued explosive activity.

The eruption of Dec. 4, 2015 was also a SUMMITAL one, therefore also NOT DANGEROUS.

Etnas reputation as a relatively FRIENDLY VULCANO comes mainly from the fact that its lavas are very FLUID (1050-1100 °C). This type of lava is easily ejected to the surface, unlike the viscous magmas produced by more dangerous subduction-zone volcanoes

TAORMINA is at a SAFE 35 KM LINEAR DISTANCE from Mount Etnas summit and there are many valleys separating Taormina, nestled on a 220 mt high hill, from the actual vulcanic area.
And then it’s quite a phisical law: lava CANNOT flow uphill.

In fact there are no lavafields around Taormina, perched high up on a solid hill overlooking the sea. Our town is build on dolomite and LIMESTONE ROCK, the same material the Great Pyramid of Giza was build with.

With the extensive data available today on historic eruptions of Mt. Etna, going back over 2000 years, it has been possible to construct OFFICIAL HAZARD MAPS, both for summit eruptions and as well as for flank eruptions based on ten tousands simulations of lava flow paths starting from tousands of different potential vents around ist slopes.

Taormina is well OUTSIDE AND VERY DISTANT from the closest official hazard zone.

An ALLERT SYSTEM with a hardware warning system was created on all slopes of the vulcano and real time connected with the INGV (Vulcanologic insitute of Catania, founded 1969) based on a relation between the pattern of volcanic tremor amplitude and explosive and eruptive activity.

When Mout Etnas activities exceed a fixed threshold, data are immediately sent from the Vulcanologic Institute to the Municipalities and to the Civil Defense.
In the case of an imminent flank eruption there will be premonitory seismicity or other phenomena that may help vulcanologists to predict the location of a possible eruption. Once the event is foreseeable, there are already tested plans for local authorities to take measures to evacuate the population of any threatened area, if necessary.

Since the introduction of this early warning alert system („Poseidon Allert System”, 1995) there has NEVER BEEN any evacuations.

So please be reassured: Mt Etna is fascinatingly active but NOT DANGEROUS .

It’s a great tourist draw. Guided excursions are organised daily up to 2900 meters at a still safe distance from the 4 main craters (3.350 meters), you can take trecking tours or four-wheel drive excursions to explore Etnas lava fields, its non active old craters, volcanic caves and tunnels, eruptive fissures and also to the beautiful forests on the northern slopes as well as to the lower fertile areas with renowned wineries and fruit plantations, not forgetting to visit the beautiful small villages and towns on its gentle slopes.

And if you are lucky enough, once you are here in Taormina, you will be able to watch a fascinating eruption from our safe distance.
This post is based on a lifetime spent in Taormina observing and studying Mt.Etnas activity both from here and also up there.