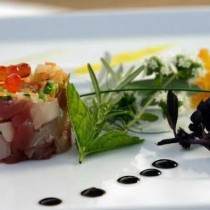 There are many ways to discover Sicily. One is to follow the SOSTE DI ULISSE (the stop-overs of Ulysses). No better way to taste, savor and fully experience the great cuisine of some of the best and Michelin-starred chefs, the finest wines of the best Sicilian wineries and the proverbial hospitality of some of the best and most charming hotels on the Island, all associated under the name of “Le Soste di Ulisse”.

It’s a guarantee for GOURMET ENJOYMENT, this is what we can say regarding the fabolous partners we got to know during the last years of our own personal travels (mostly during the 3 winter months December, January and February, when we close our own HOTEL VILLA SCHULER for refurbishments).

Lets start with our “Le Soste di Ulisse” co-member which we are happy to have here in TAORMINA:

PIETRO D’AGOSTINO, Michelin star chef of LA CAPINERA, who is not only a great chef but also actively socially engaged in the community with e.g. cooking lessons for children and for prisoners,

A truly wonderful neighbourhood, which we enjoy ourselves and can only recommend to our Hotel guests!

Our HOTEL VILLA SCHULER, open since 1905 and now the oldest owner run hotel of the whole island of Sicily, has been a member of “Le Soste di Ulisse” since many years now.

Just a 30 minutes‘ drive from Taormina, we have another wonderful hideaway, our co-member, the SHALAI RESORT, situated in the middle of the small charming Mt. ETNA town of LINGUAGLOSSA in a beautifully restored baroque Palazzo, owned and managed by the young and enthusiastic LUCIANO PENNISI, who is also one of the vice presidents of “Le Soste di Ulisse”. The Shalai offers not only stylish rooms, but also a SPA and a restaurant headed by the Michelin star chef GIOVANNI SANTORO, who puts strong emphasis on local products and a modern interpretation of traditional Sicilian cuisine.

Talking about the Mt. Etna region, which is indeed the nearest wine making region to Taormina, we must also mention the Soste di Ulisse partner wineries: BARONE DI VILLAGRANDE, BENANTI, NICOSIA,  PALMENTO COSTANZO, PIETRADOLCE, TENUTE DI FESSINA, TERRAZZE DELL’ETNA, most of them we know personally, all of them by having tasted their wonderful prestigeous wines.

During a meeting of the “Le Soste diUlisse” we got to know the country HOTEL DONNA CARMELA, a skilfully restored historic manor, located inside a mediterranean and sub-tropical nursery garden between Mt. Etna and the Ionian Sea, in CARRUBA DI RIPOSTO. The fine cuisine of their restaurant is managed by the two young chefs ROSARIO PARISI and PIERGIORGIO ALECCI.

Whenever we find 2 days off during the summer months we personally try to allow us a brief escape to our favorite island SALINA and to the HOTEL SIGNUM, visiting our friends the Caruso family. MICHELE CARUSO, CLARA RAMETTA and their children LUCA CARUSO and MARTINA CARUSO who are the souls of the most enchanting place to stay we know on the Aeolian Islands. And we love the innovative and imaginative kitchen of the youngest Michelin starred female chef in Italy MARTINA CARUSO.

On the occasion of another meeting we were happy to savor the sophisticated cuisine of GIOVANNI GUARNERI, which he offers at his restaurant DON CAMILLO, located in ORTIGIA, the beautiful historic center of SIRACUSA. Lately we passed a wonderful evening there with all our staff during our works outing end of November 2019. We where 23 persons and had a great menu based on fresh fish, served by a perfectly synchronized staff. Chapeau!

In December, during one of our romantic getaways as a couple, we enjoyed a wonderful  evening at the member restaurant CROCIFISSO in NOTO, where chef MARCO BAGLIERI offers his refined version of Sicilian cuisine.

Every year, after having closed the HOTEL VILLA SCHULER for the winter break, we do a works outing with our staff, a short 2 to 3 days journey through Sicily. We want them to get to enjoy their Island and to know the SOSTE DI ULISSE and that‘s why we plan our stays, wine tastings and dinners whenever possible at co-member hotels, wineries and restaurants.

That’s how we for example stayed at PALAZZO FAILLA at MODICA, the romantic Hotel, situated in the charming Palazzo owned and managed by the noble Failla family. In Modica we also tasted the great creations of the ANTICA DOLCERIA BONAIUTO producing the best Sicilian chocolates, try their chilly-chocs!

In RAGUSA IBLA, during another of our romantic tours as a couple, we stayed at the LOCANDA DON SERAFINO owned by the LA ROSA family and enjoyed very much the friendly service and the historic building partly located in caves, dug out of the tufa.

On this occasion, travelling during the winter period, we missed the member restaurant in Ragusa Ibla, the restaurant of LOCANDA DON SERAFINO with its chef VINCENZO CANDIANO. On our next visit to Ragusa Ibla we’ll have to catch up on that.

On another works outing with all our staff we devinely dined at the OSTERIA DEI VESPRI in PALERMO, managed by chef ALBERTO RIZZO and his brother ANDREA. They have a very interesting concept, offering “Gourmet” kitchen from April 1 to October 31, and “Old Osteria” style from November 1 to March 31.

The charming AGRIRELAIS BAGLIO DI PIANETTO in the countryside of Palermo in Santa Cristina di Gela was a real home for us during our 2016 works outings. We enjoyed their outstandingly welcoming staff, an impressive tour of their modern winery, the good kitchen, and the elegance of the large historic noble villa.

Whenever we get in the Cefalù area we love to stop at the charming mountain village CASTELBUONO at the restaurant NANGALARRUNI. The Chefs GIUSEPPE CAROLLO and his daughter FRANCESCA offer a wonderful and affectionately prepared local cuisine, sometimes with mushrooms from the surrounding mountains, which GIUSEPPE collects himself…just overwhelming!

In November 2017 we headed for the city of TRAPANI with our works outing and we had two outstanding dinners at SERISSO 47. Chef GAETANO BASIRICÒ created two wonderful dinners for our group, one based on fish, the second based on meat, vegetarian dishes of course included. Both were EXCELLENT! and we love the gentle, low profile personality of Gaetano Basiricò.

Another great experience was our works outing, which we spent at LA FORESTERIA PLANETA ESTATE, a luxurious country hotel and restaurant, located amidst of the Planeta MENFI region wineries. Planeta is one of the most prestigious Sicilian wineries with wine-growing districts spread all over Sicily and offers this elegant retreat, enriched by the exquisit and surprising cuisine of their chef ANGELO PUMILIA, who combines his Japanese experiences with Sicilian traditions.

AND MUCH MORE TO DISCOVER …

The members of SOSTE DI ULISSE are many more and we still have to discover many of them and will of course also return to those we already know!