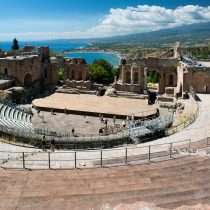 Dear guests and friends of Hotel Villa Schuler. In previous years, we have always tried to help our guests and anyone who wanted to come to Taormina to plan their vacations by providing them with a comprehensive calendar of events.

In 2020, virtually all events were canceled or postponed due to the pandemic. And, unfortunately some of them are again postponed to 2022. But we are happy to at least be able to announce a few events for the 2021 season. They all take place at the wonderful Teatro Antico of Taormina, one of the most beautiful open air locations of Italy.

We will continue to look for new events and keep you updated here on our Hotel Villa Schuler events page. It’s worth checking back every once in a while to see if we’ve found something new.

June 6 (from 9:00 to 19.00 h)
Naxos Taormina Archaeological Park – Giardini Naxos
Le Giornate dell’Euphorìa  Well-being with among others yoga, walking, Tai Chi, Pilates inside the archeological site of Naxos. Euphoria is a term of Greek origin that means “to bring good, well-being, optimism and therefore happiness” the event, a cooperation of the City of Giardini Naxos and the Naxos Taormina Archaeological Park, will transform the more than 10 hectares of archaeological area that were the seat of the first Greek polis on the island, into a multifunctional urban park. Paying the entrance fee of the archeological park, the participation of different classes for afdults and children are free of charge.
Info: parconaxostaormina.com

June 12
Teatro Antico  – Taormina
Emma, the Italian singer, songwriter, pop and rock musician in concert, known for her powerful, hoarse and raspy voice and called one of the best singers of the moment.
Info: emmamarrone.net

June 17 to 21
Teatro Antico and other locations – Taormina
Taobuk 11th edition, the literary festival of Taormina, this year with the title “Metamorfosi” (Metamorphosis), directed by Antonella Ferrara. The detailed program is not yet published.
Info: taobuk.it

June 24 (21.00 h)
Teatro Antico – Taormina
Giorgio Panariello, born in Florence, Panariello started his carreer as a comedian in Versilia and became one of the most popular Italian comedians, actors and presenters. After having published in 2020 the novel “Io sono mio fratello” (I am my brother), a great success with the public and critics, and waiting to go on stage all over Italy in 2022 with the new theater show “La Favola Mia”, Giorgio Panariello returns to the stage in the summer of 2021 with “Story”, a show with all the best of his career.
Info and tickets: ticketone.it

July 17 (21.00 h)
Teatro Antico – Taormina
the Simple Minds’ concert, originally scheduled for this date, has been postponed to July 12, 2022
instead now will come Francesco de Gregori
Francesco de Gregori back live. This summer, in fact, will be in concert in the main outdoor locations of our peninsula, with “De Gregory&Band live – Greatest Hits”, a tour that, starting in July, will see him as a protagonist on the stages of Italy to propose to the public the most famous and significant songs of his repertoire. The band that will accompany De Gregori on stage is composed of Guido Guglielminetti (bass and double bass), Carlo Gaudiello (keyboards), Paolo Giovenchi (guitars), Alessandro Valle (pedal steel guitar and mandolin), Primiano Di Biase (hammond) and Simone Talone (percussion).
Info: Tickets for the new dates will be on sale from Monday, May 17, 2021

July 24 (21.00 h)
Teatro Antico – Taormina
Alberto Urso, the young tenor and pianist from Messina, who in 2019 won the Italian talent show Amici di Maria De Filippi and in 2020 participated at the Sanremo Music Festival. His debut album „Solo“ was released in May 1919. Urso studied music theory and solfège at the Conservatory of Messina, he continued with piano, sax, singing and drums and obtained his master’s degree in opera singing at the Conservatory of Matera.
Info and tickets: website.albertourso.it, ctbox.it and ticketone.it

July 29 (21.30 h)
Teatro Antico – Taormina
Antonello Venditti, unplugged special 2021, the Rome born Italian singer-songwriter and pianist who became famous in the 1970s for the social themes of his songs. His most famous the songs from the 1970s and 1980s are “Lo stambecco ferito”, “Marta”, “Compagno di scuola”, “Campo de’ Fiori” and others. Venditti’s latest album is Tortuga, released in 2015. On his 2021 tour he will present his classics in an unpulgged version.
Info and tickets: antonellovenditti.it, ticketone.it

August 5 (21.00 h)
Teatro Antico – Taormina
Fabrizio Moro. Canzoni nella stanza – unplugged 2021. A special event with the Italian rock star Fabrizio Moro. Under the special circumstances of a reduced number of spectators due to the pandemic rules, Moro created an unplugged tour, with only two musicians who will acompany him on stage, Danilo Molinari (guitar) e Claudio Junior Bielli (piano). “I have reproduced a living room on stage – says Fabrizio Moro – “There is a carpet, two guitars and a piano… there is also a bottle of wine and an ashtray. I’ll come to visit you for real this time and I’ll take this stuff with me, so that you can hear how the songs are when they are born, without arrangements and without too many colors. Raw… essential. We start again. Slowly but surely. I’ll see you at your house, it’s kind of my house now anyway.”
Info: facebook.com/fabriziomoropage

August 6 (21.00 h)
Teatro Antico – Taormina
Diodato the winner of Sanremo 2020, announced his summer tour, after the blocks due to Covid. Three dates in July, five in August and one in September and he arrives also in Sicily, for only one concert, which will be at the Teatro Antico. Tickets will be available soon.
Info: diodatomusic.it

August 7 (21.30 h)
Arena Villa Dante – Messina
Max Gazzé, the singer-songwriter and bass player during his “la matematica dei rami tour” makes a stop in Sicily. Gazzè picks up his bass guitar and goes back on tour. In recent months he has  continued to produce music, releasing his new album “La matematica dei rami”, produced with the Magical Mystery Band, between underground and pop, electronic and rock. It will not be this band to accompany Gazzè, he will play live with his historical musicians: Max Dedo on woodwinds, Cristiano Micalizzi on drums, Clemente Ferrari on keyboards. The only confirmation is Daniele Fiaschi on guitars.
Info and tickets: maxgazze.it and ticketone.it

August 21 (21.00h)
Teatro Antico – Taormina
Gianna Nannini in concert. Pianoforte e Gianna Nannini – La Differenza. The most famous rock singer in Italy remains faithful to Taormina. When she performs you can be sure that everyone will sing along to her greatest hits. The summer tour will kick off on July 13, 2021 in the most beautiful open-air theaters in Italy and will be an unmissable opportunity to hear Gianna Nannini’s most beloved songs in a new artistic expression.
Info: ticketone.it and giannanannini.com

August 22 (21.30 h)
Teatro Antico – Taormina
Mario Biondi in concert. The singer and composer from Catania presents his new album “Dare” (Giving) Giving is an attitude as well as a life choice, Biondi says. It is a combination of his style of the beginning, markedly jazz and soul, to sounds still little explored, including funk, disco, pop, even with rock passages, eclectic and contemporary. The concert is organized by Puntoeacapo and included in the program of Sotto il Vulcano.
Info and tickets: puntoeacapo.uno  ctbox.it  mariobiondi.it

August 28 (21.00h)
Teatro Antico – Taormina
Colapesce and Dimartino in concert. The duo revelation of Sanremo 2021, at the top of the streaming charts and radio “Musica leggerissima” (already certified Platinum Record) will be on tour this summer with a series of concerts and will perform at the Teatro Antico in Taormina. The two Sicilian singer-songwriters will present a show in which they will play live both the songs that make up “I Mortali” and some classics from their solo repertoire. A special date, with a series of guests, which promises to be the real event of the summer tour. At the moment the concert results as already being sold out.
Info: ticketone.it and facebook.com/musicadicolapesce

August 30 (21.30h)
Teatro Antico – Taormina
Carl Brave in concert. The italian rapper and record producer rose to fame in 2017 with the album “Polaroid”, as part of the duo Carl Brave x Franco126. His last solo album was “Coraggio” (which is also his real name) relaesed in 2020.
Info and tickets: ticketone.it and boxol.it

September 4 and 5 (21.00 h)
Teatro Antico – Taormina the two concerts have been postponed to 2022, the exact dates not yet published
Il Volo. The three young operatic pop singers, looking back to a 10 year’s career now, have been regular guests to Taormina. They are so popular, that they already nearly sold out the first evening of their stopover in Taormina. Baritone Ginaluca Ginoble and the two tenors Piero Barone and Ignazio Boschetto won the Sanremo Music Festival 2015 and since then they are touring worldwide.
Info and tickets: ilvolomusic.com, ctbox.it and ticketone.it

September 27 (21.00 h)
Teatro Antico – Taormina
Sting. My Songs. It will be Sting’s only summer concert in Italy. The Sicilian stage will also be the first European one of the “My Songs” tour. The show is organized by Musica da Bere and will be able to accommodate, in accordance with the regulations in force, only 1548 spectators.
Info and tickets: ticketone.it